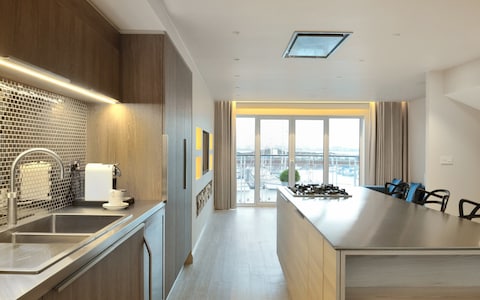 A 30-minute drive south of Belfast, near the semi-rural town of Carryduff, sits a striking family home. Set against the surrounding greenery, its white and grey façade makes a bold statement. Even at first glance it’s little wonder that this house has been declared the best new home of 2017 at the Federation of Master Builders’ annual awards, which celebrate the work that small, local builders do across the UK. Its creator, John Dynes & Son from Northern Ireland, has also won the top prize, for the best overall master builder.

The house has two white split gable roofs with a zinc ridge, designed this way to reduce the height of the property to comply with planning restrictions, with the remainder of the exterior clad in steel and Donegal stone. These shades of grey have been used throughout the 6,300 sq ft house to create a modern but cosy home, from the brushed steel kitchen counters and natural slate shower trays to the angular chrome chandelier that presides over the entrance hall.

The open-plan layout allows light to fill the five-bedroom home through floor-to-ceiling windows, a glass corridor and 13ft-wide glass doors that lead from the living room to a tiled terrace.

It was this quality of bespoke design that put John Dynes & Son in the running for an award, but the unique features that clinched it the blue ribbon, says Brian Berry, chief executive of the FMB.

“The elements that really stood out were the floating walnut staircase with glass balustrade, the hanging stone fireplace in the living room and – my favourite – the hidden laundry chute in the kitchen,” he says. “This shows what can be done at a time when we’re seeing a lot of mediocre, bog-standard executive homes. There is creativity out there and it can be done on a relatively modest scale.”

The year-long project was not without its challenges, though – such as when the client brought the completion date forward by eight weeks due to the sale of their house going ahead sooner than expected. “We worked tirelessly around the clock and all works were completed in the nick of time for the client to move in,” says Gavin Dynes, who worked on the project. “When I saw the delight on the client’s face I knew all my efforts were worthwhile.” The best new homes this year, according to the Federation of Master Builders