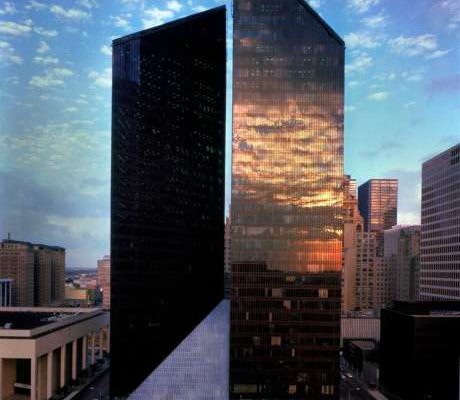 The Chapel of St. Basil — the University of St. Thomas’s va-va-va-voom, gold-domed, cross-topped showpiece — was dedicated 20 years ago today. If you know the university at all, you recognize that chapel: It’s the building that you notice as you drive past on Alabama Ave.; it’s the image on the university’s logo.

The chapels story, and the larger story of St. Thomas’s architecture, are important to Houston: They involve Philip Johnson, the architect most responsible for both St. Thomas’s campus and downtown Houston’s skyline; John and Dominique de Menil, the city’s most notable art patrons; the tricky business of branding a Catholic university; and a whole lot of 20th-century architectural fashion. October 3, 2007 — Last week the University of St. Thomas dedicated the final work that superstar architect Philip Johnson designed for Houston, the city where he made his name. Compared to other Johnson hits — big deals such as skyscrapers Pennzoil Place, Williams Tower (originally Transco Tower) and NCNB Center (née RepublicBank) — the Edward P. White Memorial Plaza is a trifle: a 30-foot black slab of granite inscribed with a tilted white cross and set in front of a fountain that proclaims the university’s name. Squeezed between the university’s Parking Lot L and a trafficky stretch of Montrose Boulevard, it’s less a plaza — a public gathering spot, an enticing place to hang out — than a classy billboard for the university: The Edward P. White Memorial Branding Opportunity.

It’s perfect, in its way: exactly what St. Thomas wanted and a fitting final note for the university’s long relationship with Johnson. Over the years, both the architect and the university changed radically, but they changed in ways that kept them right for each another.

Johnson himself designed the quad’s first three buildings: Welder, Jones and Strake halls. In place of Jefferson’s neoclassical columns and Greek temple forms, he called for flat-roofed boxes with sleek black walkways made of steel. The designs’ beauty was the quietest kind, minimalism that hinged on perfect proportions and detailing. The buildings whispered.

And they whispered to each other. Architectural historian Stephen Fox suspects it was no accident that the buildings faced each other, not the outside world. In the ’50s, Fox notes, Catholics in the Bible Belt often felt besieged. St. Thomas’ inward-looking quad was a place where the wagons had been circled — or at least, the academic buildings had been.

A decade after drawing St. Thomas’ master plan, he almost executed another building for its campus. In 1967, the de Menils asked him to design the Rothko Chapel, intended to house 14 paintings by Mark Rothko. The chapel would have commanded one end of St. Thomas’ quad, the spot where Doherty Library now stands. Philip Johnson and the University of St. Thomas’s sexiest building – Houston Chronicle