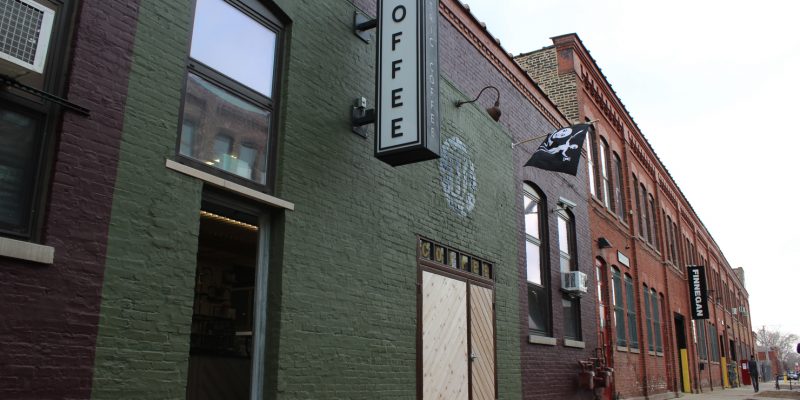 Cafe remodels are a fact of life—provided your cafe has been around long enough to need one.

Age isn’t an issue for the Intelligentsia Coffee bar inside Chicago’s historic Monadnock Building. The site—once the world’s largest commercial office building—is located in Chicago’s South Loop area, and began construction in 1891 before undergoing an extensive interior renovation in 1938. Monadnock is today an icon among the city’s beloved historic buildings, part of an urban cultural identity that makes Chicago one of the most important architectural cities in the world. (And one of the sturdiest; walls supporting the north part of Monadnock are six feet thick!)

Intelligentsia has had a cafe in a street-level retail space at Monadnock since 2003. Now here in 2017, the space has undergone a stunning remodel overseen by Wheeler Kearns Architects and Intelligentsia. Wheeler Kearns’ leads on the project were Daniel Wicke and Calli Verkamp, and the space was built by Builtech General Contracting. The remodel’s overall effect is a duality of sorts, at once contemporary and evocative of yesteryear, looking forward and backward in the same present motion.

Intelligentsia Monadnock’s original cafe design was modeled on Adolf Loos’ iconic Cafe Museum in Vienna, coupled with the service style and functional character of Italian espresso bar culture.Wheeler Kearns and Intelligentsia were faced with a sensitive and difficult task: to update and refresh the cafe experience, while respectfully maintaining the space’s place and history on the ground floor of one of Chicago’s most architecturally important and historic public buildings.

Rose offered us the following quote from Miller’s study on the Monadnock Building, as an example of the ethos that helped drive this restoration project:

“We have found that everything in the building is quality-oriented, based on practicality and durability,” Donnell says, “and much of itis elegant.” And Donnell likes to remind people that one of the main reasons the façade is plain is because Brooks felt that protruding decorations would collect dirt and attract pigeons, making the building difficult to maintain.

Remodeled countertops were cut by metalsmith Virgil Robinson, and designed to withstand a high-moisture cafe environment while evoking the cafe’s history. “We chose materials very considerate of high-use and longevity,” says Rose, “such as laminate and 1/4″ plate stainless steel, specified in pale grays and browns and heavily patinated respectively, in order to stand the test of time while resonating with the 1893 structure.” Even the ceilings have been remodeled, swaddled in a French-made fabric insulation that helps dim and soften the cafe’s ambient noise.

Fabric insulation is all well and good, but what about the coffee? Intelligentsia’s original Monadnock bar featured a prominent focus on hand-brewed coffee, even hosting occasional siphon bar demos, and this tradition has continued in the remodeled space, where multiple hand-poured coffees will be offered daily, along with more recent innovations like sparkling Kilogram Tea on draft, plus a La Marzocco Strada espresso machine, grinders by Mahlkönig, a Marco Uber Boiler hot water tap, scales by Acaia, kettles by Hario, and more. But in a nod to the times—while retaining its retro bonafides—Intelli has also added a massive, impressive Grindmaster Barista Series Urn batch brewer, whose design feels flown in wholesale from the grand cafe and ballroom coffee services of the 20th century. A similar brewer once occupied space at this cafe but has been out of service for the last several years, in favor of an all-by-hand filter coffee program. Renovation & Rebirth At Intelligentsia’s Historic Monadnock Cafe