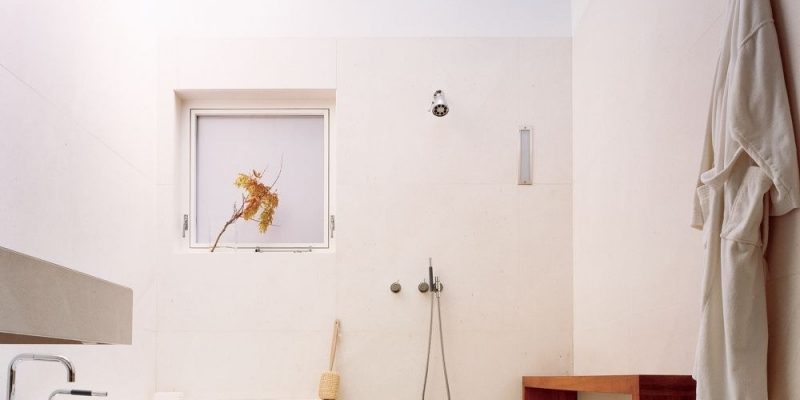 Pilati designed carved-stone seashell sconces to accent the vaulted shower; the sculptural shower fixture was custom made, and the fittings are by Lefroy Brooks. 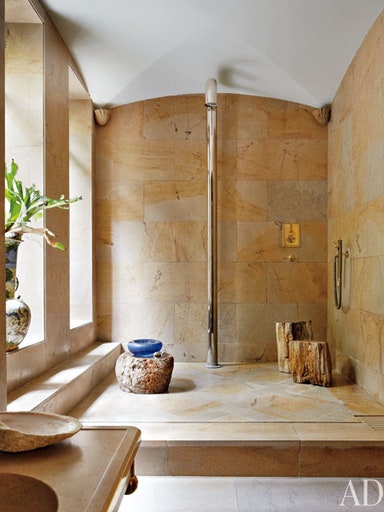 Sliding door, swinging door, or super-luxe waffle-fabric shower curtain? When it comes to shower design, many of the biggest decisions have to do with enclosure—even the fanciest shower head isn’t any good at all if it’s puddling water on your bathroom floor. The tradition in warmer climates to opt for doorless showers, however, has us rethinking our dependency on these design features. “I first came across doorless showers in the Caribbean and Latin America,” says designer K.V. Harper, the principal at KEX Design + Build, who was so inspired by the liberating simplicity of these designs that she opted for doorless showers in her newly renovated New Orleans home. “There’s something liberating about showering in an open shower,” she says, and anyone who has ever showered outdoors would agree.

But what about the splatters, you ask? “A well-designed shower stall will keep water contained in the stall, and you have the added bonus of showcasing the tile without having it contained by a glass door,” says Harper, noting that your floor can actually handle keeping the rest of the room dry. “The best way to keep water contained is to make sure that the floor is pitched properly and to have a large enough drain. The floor pitch will depend on the size of the shower stall and the placement of the shower faucet; you want the pitch to be deepest where most of the water is falling for faster drainage.” She loves the concept so much it’s changed her entire shower design approach. “I can’t imagine installing a shower door for any of my [future] projects unless a client specifically asked—and then I would still try to talk them out of it.” So call your contractor and halt those shower door plans—and take inspiration from our favorite doorless showers from the AD archives: 7 Doorless Showers & Why We Love Them | Architectural Digest