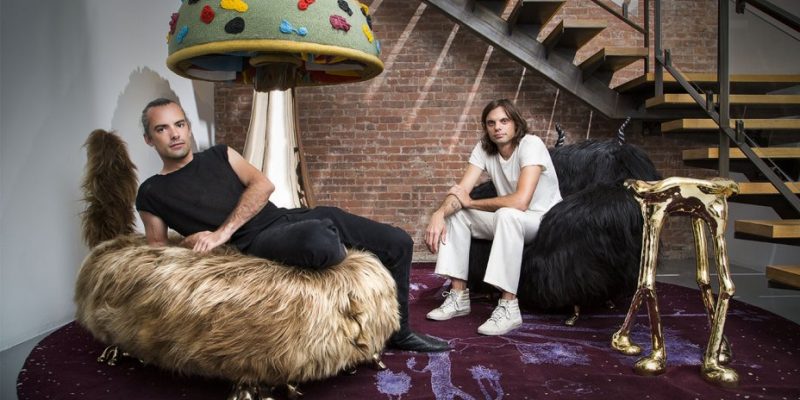 The pioneering UTA Artist Space in Boyle Heights is celebrating its anniversary with a survey of works by Nikolai and Simon Haas, otherwise known as the Haas Brothers, Sept. 9 through Oct. 14. The 33-year-old art-and-design twins have been on the scene for just six years, but that’s enough for a full-scale survey (their first L.A. show), including furniture, installations and objets d’art.

“It has been an incredible year. We have hosted six major exhibitions that were innovative, multi-sensory and dynamic, with artists who would not have otherwise shown their work in L.A.,” UTA Fine Arts’ Joshua Roth tells The Hollywood Reporter in an email. “When thinking about our one-year anniversary, there was no question that this was the perfect show. Simon and Niki’s incredible ability to move seamlessly between genres and materials make them the ideal creatives to mark this milestone with.”

Brothers to actor Lukas Haas and sons to screenwriter Emily Tracy, the duo grew up with celebrity friends like Tobey Maguire, who helped kick-start their career by commissioning furniture for his office at Sony Pictures (they’ve also collaborated with Louis Vuitton on furnishings). Their new show includes fur-covered items and furniture with titles like Fleece-a Kudrow, a bench covered in black Icelandic sheepskin, Beyoncle, a hand-thrown porcelain accretion, and Armold Schwarzenegger, a white Icelandic sheepskin-covered item.

Advocate for the Sexual Outsider (also known as ‘Sex Room’) is an installation that stunned Design Miami/Basel when it premiered in 2014. It features penis-shaped lamps and other suggestive furnishings, as well as a doorway draped with leather resembling a giant vagina. “The way we present the work, it’s super non-pornographic,” Nikolai says about the show’s centerpiece, an installation that marked a turning point for the duo. “We’re not doing it for shock value. It’s to bring positive vibes to sexuality.”

“Most people are coming out laughing cause they have to exit through the vagina,” adds Simon. “We were focused on sex mostly because the shameful aspect of it is really imposed on people; where sex is such a natural part of reality for every human, and sexual desire is so natural and also healthy that applying shame to it is, I think, very bad.” UTA Artist Space Celebrates First Anniversary With ‘Haas Angeles’ | Hollywood Reporter