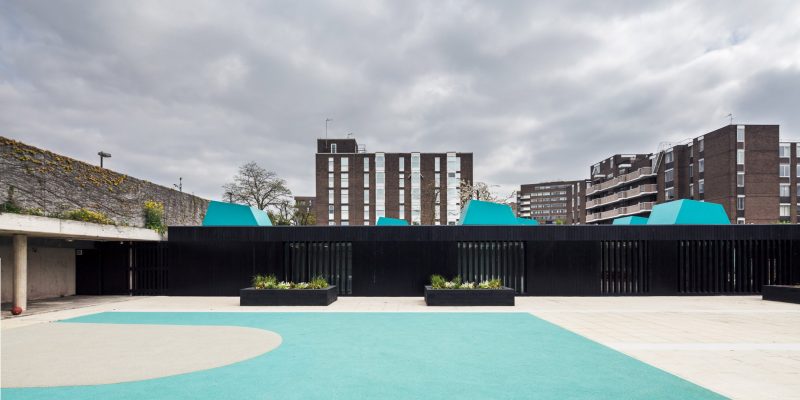 British architecture studio Haverstock has added new facilities to a school on the historic Alexandra Road Estate in London’s Camden, built by architect Neave Brown in the 1970s. The Camden-based studio added new therapy rooms and short-stay accommodation for up to 50 young people with autism and learning difficulties to the Jack Taylor School, which first opened in 1978 at the celebrated modernist estate.

The two new buildings, named Alexandra College, are arranged around a series of internal courtyards, with turquoise raised geometric-shaped skylights lining the roofs of their new, black-painted timber structures. 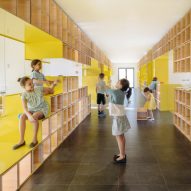 The same colour is used to demarcate the basketball court, complementing the blue colour of the original handrails that run along the terraces of the estate.

“We developed a use of colours within the existing building to promote a greater independence when navigating the building,” project architect Gavin Stokes told Dezeen.

“The existing building provides great levels of natural light and this is something we really pushed for in the new build – lots of breakout spaces are provided, including many external break out spaces.”

The Jack Taylor School was originally known as the Alexandra Priory School, but was renamed in 1991, at the same time it changed to cater specifically to children with special education needs.