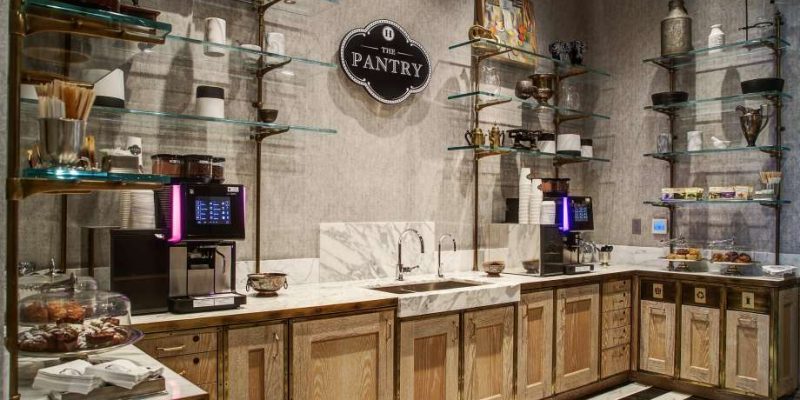 Imagine if that out-there relative of yours designed a social club. In a sense, that’s the vision at Uncle Harry’s — a resident’s only playground atop the newly finished The Harrison building in Rincon Hill.

The brainchild of fanciful designer Ken Fulk, the club is accented by eclectic artwork and unique conservation pieces.

Fulk, a revered interior designer, has turned heads across the bay and around the world for decades. His portfolio includes the Mark Hopkins Hotel on Nob Hill, as well as a litany of private residences and clubs around the globe.

“As you stand in front of these panoramic views of the bay with Treasure Island in the near distance, it feels like you could be living in any moment of San Francisco history,” Fulk said in a statement issued by The Harrison. “It’s meant to feel like the living room of your most interesting ancestor — that adventurous, world-traveling great uncle.”

The club hosts wine tastings, rehearsal dinners, and private events. It includes a speakeasy bar and sitting area with striking views of the entire bay and San Francisco.

Fulk’s decor blends a variety of rich textures and colors. Lacquer green walls and tinted glass accentuate the shimmering bay waters in the distance. A myriad of prints and a variety of polished and unpolished metals enrich the space. Black marble, distressed wood, and brass fretwork form part of the material palette.

Celebrated for his boisterous design and penchant for high-end events. Five years ago Fulk quarterbacked a Halloween fundraiser that included a private Stevie Nicks concert. The dinner and concert benefited the Strand Theater and shut down an entire city block. Fulk has nearly 50 employees at his SoMa studio.

He was chosen as creative director for The Harrison in 2016. Fulk responded with his trademark eclectic style and exuberant material palette. He arranged the lobby, the pantry, exercise room and Uncle Harry’s within the 49-story luxury skyscraper.

His stylings include the lobby’s oak walls and intricately patterned flooring. The vintage baby grand piano in the corner is also his doing. Fulk also recently just rolled out his first line of products for Pottery Barn. Items include a nickel-plated cocktail shaker in the shape of penguin.

Building on the success of The Harrison, Fulk has done the same for a luxury development in New York City. In this case, he’s working alongside the community known as Henry Hall in Manhattan’s Hudson Yards. Fanciful interior designer createsplayground on top of The Harrison – SFGate