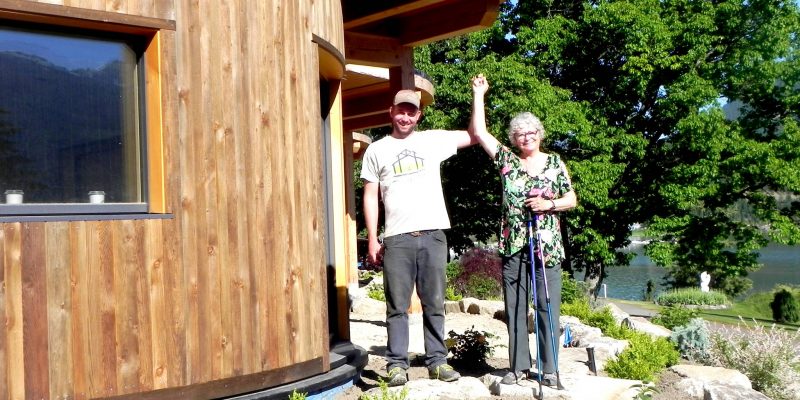 Dave Madden and Molly Bell stand outside one of the Passive House condominiums on the Nakusp waterfront. These will be the eighth, ninth, and tenth Passive House units in British Columbia.

After deciding to build three condos, Molly Bell heard about the idea of making Passive Houses.

Molly Bell moved to Nakusp two years ago looking for satisfactory seniors housing. When she didn’t find anything, she decided to build her own.

After purchasing property on the waterfront to build her home, she discovered the property was actually zoned multi-family or residential plus commercial, meaning she couldn’t build a single-family dwelling there.

After deciding to build three condominiums instead, she was introduced to the idea of making the condos Passive Houses.

A Passive House is a rigorous, voluntary standard for energy efficiency in a building, reducing its ecological footprint. It results in buildings that require little energy for space-heating or cooling. They promise an energy usage of 15 per cent compared to conventional construction.

“It’s three condos and then the coach house has a rental unit upstairs,” she said. “I’d like to combine that with a caretaker who gets a reduction in their rent for taking care of anything that needs to be done.” A passive method for building homes in Nakusp – Arrow Lakes News