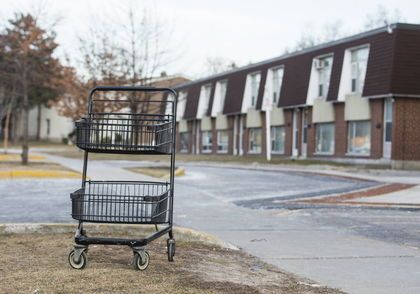 Throughout that year, I went through 70 TCHC buildings with the people who lived in them. Some buildings, in neighbourhoods across Toronto, were pleasant, orderly apartment blocks and townhouse rows — indistinguishable from the private housing surrounding them. Others were crumbling wrecks, rife with infestations and crime.

I toured one building where half the exterior doors had no working locks. Dealers and gangbangers could walk the hallways as freely as strolling down the street. Security cameras had their wires cut and their lenses spray-painted to render them useless.

Residents of another apartment complex in North Toronto hid in bushes with me late one night, so we could watch the traffic coming and going through the front door.

Drug dealers came and went every five minutes. One young man pulled up in a BMW and marched up to the entrance with a big wad of bills clenched in his hand — an open boast of how much money he was taking from the vulnerable people inside.

At another building an elderly lady, recovering from heart surgery, complained to her landlord about all the drug activity in her hallway. She said a gang member told her if she didn’t “shut up,” he would “cut her.”

Residents at a downtown building took me to the door of a unit being used as a crack house. The door was dented from what appeared to be a forced entry. Home invasion or police raid? Could have been either, I was told, because TCHC had been trying to evict the resident for five years without success.

In fairness, Toronto Community Housing has been trying to fix these problems with the limited resources available to them.

New, better security cameras are being installed — mounted higher on the buildings, out of vandals’ reach. Security patrols are being redeployed to try to better secure high-crime buildings.

But there are other necessary measures that can only be done by the provincial government. Sadly, two years after Tory’s task force started asking for some of these things, the province has done nothing. Social housing residents deserve a safe home | GUEST COLUMN | Columnists | Opini