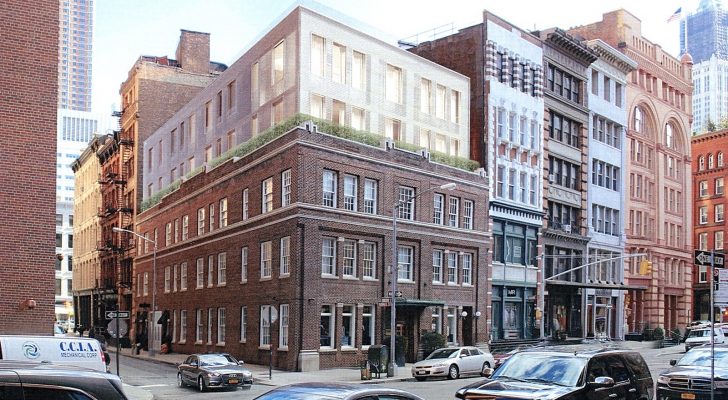 Rendering of a glass brick addition proposed for 50 Hudson Street, at the corner of Thomas Street. Its architect, Thierry Despont, compared the original three-story building to a “missing tooth” because it was shorter than the other around it. Rendering: Thierry W Despont Ltd. via The Tribeca Trib

The owner of 50 Hudson Street in Tribeca is proposing to top his three-story brown-brick building with a highly visible two-story glass-brick addition.

Eric Schlagman, who has lived and worked in the building for 10 years and owns Bar Cyrk on the Thomas Street side of 50 Hudson Street, told Community Board 1’s Landmarks Committee last week that he sees the 32-foot-high addition as a needed improvement to his 87-year-old property.

“While the building has pleasant features, the location deserves a world-class architect that it didn’t get when it was originally built,” Schlagman told the committee, which is advisory to the Landmarks Preservation Commission.

The architect is Tribeca-based Thierry Despont, whose firm has worked on the restoration of the Statue of Liberty and the renovation of New York’s Carlyle Hotel and the Ritz Paris, among other high-profile projects. He and historic preservation consultant Jacqueline Peu-Duvallon, also hired by Schlagman, argued that the building, which can be seen from Duane Park, is out of scale with the taller buildings. The added height would help it fit in with its neighbors, they said. Despont called it the “missing tooth” in the view from the park.

“If this was raised two stories, three stories it would complete the park,” the architect said. “For me this is the most convincing argument.”

That view was echoed by several residents who read from prepared statements, urging the committee to support the proposal. “Mr. Despont has given us a design that is both respectful of the original structure but also manages to elevate it to something much greater,” said Suzanne Columbia, a Duane Street resident.

Despont said glass brick had not been his first choice of material for the addition, having first wanted a red brick that exactly matched the original. But Landmarks staff rejected it, he said, because they want visible additions to be easily identifiable as non-original. Glass Addition Proposed for Three-Story Brick Building in Tribeca | Tribeca Trib Online