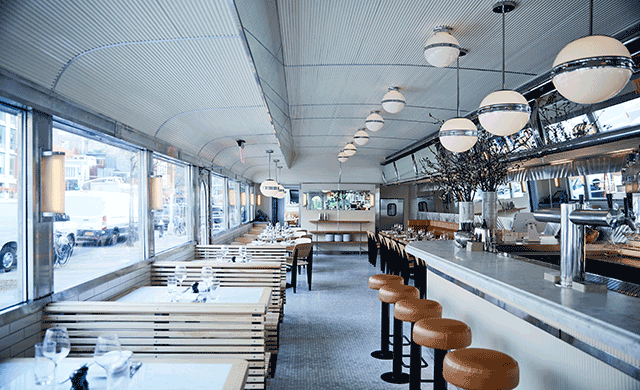 New Yorkers are accustomed to seeing their favorite dives vanish overnight to make way for something new. So when one bygone institution makes a glorious comeback, it’s bound to attract plenty of attention—and it needs to look its best. Chelsea’s freestanding Empire Diner reopened its doors in April after previously closing in 2010 after a 35-year run. Under new ownership from the Cafeteria Group and with chef John DeLucie at the helm, the classic concept upholds its Art Deco appeal but offers a slew of contemporary twists. “So many people have had a great memory or experience in the space, so we wanted to recapture that, but in an authentic way,” says co-owner Stacy Pisone. “This was definitely a renovation, even though it felt like a rebuild at times.”

Pisone enlisted Anurag Nema, principal at locally based Nemaworkshop, to help craft the new and improved restaurant. The design team wanted the diner to reflect a classic Old World charm without feeling dated. Because of the bi-level building’s landmark status, changes to the façade were forbidden. The team was, however, able to swap the roof and blow open the walls to outfit operable windows to provide a more organic connection to the street. The overhauled 100-seat interior marries the sensibilities of a European bistro with a midcentury style for a modern air. Nema and the design team also maintained the curvature of the ceiling, but added linear wood strips to emphasize the length of the restaurant. “During the day, it creates ambient reflections of the ample sunlight that floods in through the old diner windows. At night, it diffuses the warm flow of the light fixtures,” Nema adds.

The sign board that runs along the length of the place remains, but Nema replaced the vinyl letter signs with a mirror for a dash of elegance. Orange leather dresses banquettes, and light ash wood chairs and booths add warmth to the sleek space. Luxe materials, such as marble counters and floors, contrast with chrome-accented globe light fixtures, which act as an homage to Empire’s timeless appeal. “We choose to use globe fixtures similar to the lights that were used at Empire Diner in the ’70s and ’80s,” Nema explains. “They allowed us to get the reflections in the ceilings that we wanted while also giving the space a warm, inviting glow.” Upstairs, walnut-wrapped walls add warmth, complementing the main floor’s classic look.

“We wanted to create an eating space that reflects New York City and Chelsea as it exists today, while also acknowledging the history of Empire Diner and what it was in the [New York City] of the past,” says Nema. “We wanted Empire to feel both warm and luxurious while still feeling like a diner.” Empire Diner | Hospitality Design