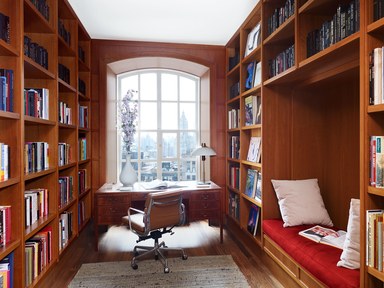 “Putting together two apartments in a 110-year-old building in New York has its challenges,” admits Alexander Gorlin, principal at Alexander Gorlin Architects of the pied-à-terre he overhauled with project designer Kate Kaiser in the famed Upper West Side Beaux Arts building, the Ansonia. Still, the challenges were ones he was more than ready to embrace. His clients, author of Battle Hymn of the Tiger Mother Amy Chua and her mystery-writer husband, Jay Rubenfeld, wanted a comfortable home to unwind in when visiting the city (the pair are also both professors at Yale University), with enough space to host their two daughters. Something modern, but with traditional Asian touches.

Gorlin quickly got to work on a gut renovation that took 18 months to complete, creating rooms that pull double duty and working to bring light into the depths of the apartment. Walls were both added and removed to carve out seven spaces over 2,700 square feet. The crown jewel of the space quite naturally became the corner tower room, which Gorkin likens to a cloud floating in the sky. For a truly celestial mood, he employed blue and cream shades to create a purposeful contrast with the rich warm tones and woods that dominate the majority of the home. When rooms lacked natural light—as was the case with the long, rectangular dining room—Gorlin used the handicap to his advantage, developing a dark, glamorous ambience for his clients’ frequent dinner parties with lacquered furniture and a taupe-and-pink hand-painted wallpaper. In both the master and secondary bedroom, which the girls share when they’re in the city, Gorlin favored pared-down, serene decor to allow the family to escape from the bustle of Broadway below. The entryway presented its own set of architectural issues, including a load-bearing central column, but it fittingly became one of the most striking spaces through the use of intricate wood inlays and antique mirrors. Or as Gorlin likes to see it—“it’s an airlock and decompression zone, from the outside world to their own sanctuary.”

“The pattern in the floor creates an anchoring element that’s like a built-in carpet in wood,” says architect Alexander Gorlin of the entryway to his clients’ New York City pied-à-terre. It was the most difficult space to design due to structural restrictions—the central column could not be moved, so Gorlin chose to cover it in antique mirrors. The bronze pots and stools were found on 1stdibs. Alexander Gorlin Designs a Polished New York Apartment in a Famous Beaux Arts Building | Architectural Digest