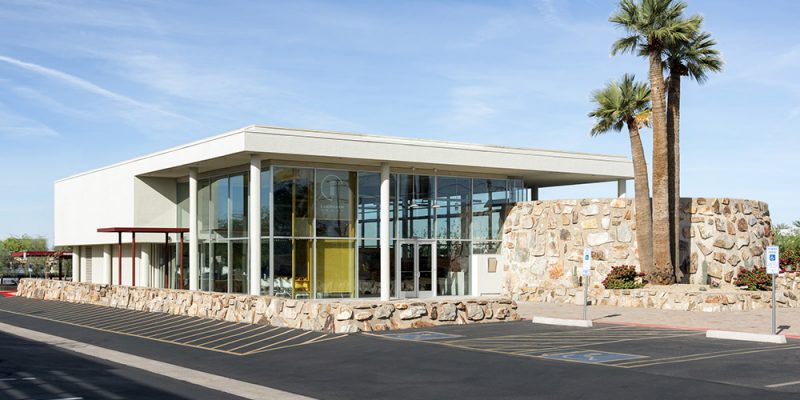 William Pereira fans, rejoice! Though many of the high-modernist architect’s masterpieces are under threat of demolition, there is one notable structure in Phoenix, Arizona, that will continue to live on.

The former Farmers & Stockmens Bank—originally built in 1951 by Los Angeles–based Pereira & Luckman and designed in a localized variant of the international style—was landmarked in 2012 and restored in 2014. In spring 2017, the building became home to regional offices for Cuningham Group Architecture (CGA) and its staff of 20 architects and landscape architects who built out the office’s interiors.

The asymmetrical 6,000-square-foot structure—a rectangular glass box interrupted by a rounded, stone-clad vault—is cited by the City of Phoenix Historic Preservation Office as a hallmark of the Salt River Valley’s post-World War II expansion. The building is notable for its contemporary style and because the bank it housed was a key financial institution for the growing region’s stockyard communities. The structure was occupied by a Bank of America branch until 2012, and over the years suffered from a variety of incongruous renovations, including the replacement of many glass curtainwall panels with stucco cladding. Those changes have now been reversed, leaving the open, airy structure to shine as was originally intended.

Nabil Abou-Haidar, principal at CGA, said that the firm wanted to keep the building’s lofty interiors “as open as possible.” The architects filled this “blank shell” modestly, adding workstations along the ground-floor areas while also returning the mezzanine level back to its original function as a meeting room. Abou-Haidar added that the firm sought to make the office spaces as perfectly lit as possible, going so far as to install highly programmable, dimmable lighting fixtures and MechoShades throughout the office. Aiming to stay true to the midcentury-modern era that birthed the structure, the firm installed time-appropriate furnishings and sought inspiration from the style for original additions, like the streamlined ceiling fans and pendant lighting fixtures installed in the main lobby. The Farmers and Stockmens Bank is now home to architecture firm – Archpaper.com