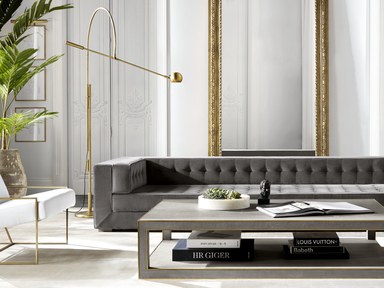 Since its launch in June of last year, RH offshoot RH Modern has made a point of enlisting respected designers to conceive pieces for the company.

Jonathan Browing, Barlas Baylar, and Vicente Wolf have all partnered with the brand, and this season’s newest additions are no different. True design devotees, especially those in New York, will likely be elated to see one name included in the most recent catalog: John Birch, founder of cult-favorite furniture gallery Wyeth.

Birch founded Wyeth, which has showrooms on Canal Street in Manhattan and in Sagaponack, New York, as well as online at 1stdibs, with his brothers in 1995. Since then, it’s grown to be a stalwart in the design world, attracting loyal fans including designers, collectors, and even Mary Kate and Ashley Olsen, who brought a new spotlight to the company when they used it as a source for their The Row stores.

After a decade operating his showroom, Birch began producing his own products out of a Brooklyn studio, and this season he becomes one of the latest talents to lend his eye to RH Modern. Birch’s Metropolitan sofa, a handsome tufted number, has the low-slung frame and sleek lines of many of the 20th-century pieces offered at Wyeth. It’s a sure complement to the vintage pieces undoubtedly dotting the home of any Wyeth devotee. RH Modern Debuts Collaboration with Wyeth | Architectural Digest