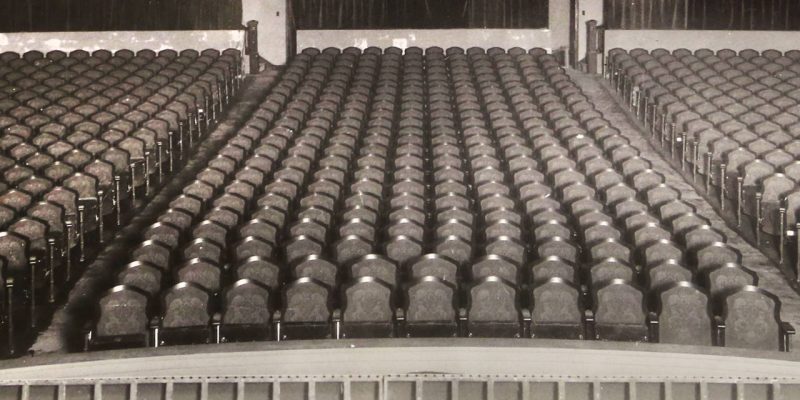 It’s been 90 years since the Jayhawk Theatre first turned on its stage lights and movie projector. Here’s a chronological look at the theater’s history.

Topeka businessman E.H. Crosby announced on Aug. 11, 1925, his plans for a new entertainment complex that would include a hotel, theater and arcade at the corner of S.W. 7th Ave. and S.W. Jackson St. Crosby was co-founder of the Crosby Bros. department store.

Work immediately began on the complex, which ended up costing $1.25 million, of which about $400,000 was spent on constructing the Jayhawk Theatre.

The 1,500-seat theater was designed by Carl and Robert Boller, of Kansas City, who were so pleased with the outcome they used it as a model for other theaters. Thomas W. Williamson, who designed Topeka High School and other capital city buildings, was the supervising architect.

The Jayhawk Theatre opened its doors on Aug. 16, 1926, with nearly 6,000 people coming to view the ornate theater and see its first show, which was presented five times that day. The show featured live organ and symphony music, newsreels, a cartoon, a song-and-dance number and “Mantrap,” a movie starring Clara Bow.

Another eyebrow-rising highlight was the lighted ceiling dome, which could change color — from bright daylight to sunset to moonlight night and then rosy dawn. The dome was pierced with tiny holes to create twinkling stars when nighttime effects were used.

The balcony was supported by 78-foot-long steel girders, and the theater’s walls were 17 to 21 inches thick. Dressing rooms were underneath the stage, and a projection booth sat above the balcony. The steel-and-concrete structure had two exits with box offices — one on S.W. 7th Ave., the other on S.W. Jackson St.

In its early days, the Jayhawk projected silent movies onto its silver screen and booked vaudeville acts and local performers to provide entertainment before or between the films. Fashion shows, beauty pageants and amateur contests also were mainstays.

“In the day of the silent picture, the larger theaters had regular orchestras who played throughout the performances. The music was quite important, even as it is today, to bring out the proper mood for the scene at hand. … Maintaining an orchestra, even a small one, was an expensive overhead and one that was eliminated just as soon as music could be recorded and reproduced in full fidelity,” wrote James D. Wallace, a Topekan who saw hundreds of movies at local theaters during the 1930s.

“What really becomes the kicker is when (they started) developing mega-shopping centers and the indoor malls,” Doug Wallace said.

The Jayhawk Theatre was nearly razed in 1992, when developer Howard Paul planned to demolish the theater and replace it with a four-story parking garage. Preservationists rallied and blocked the demolition.

Taylor wanted to construct the theater’s future around “In His Steps,” a play adapted from the best-selling book by the Rev. Charles Sheldon, a Topeka minister who initiated the “What Would Jesus Do” movement.

Restoration and fundraising efforts continued, although slowly. The roof of the theater was repaired, and temporary electricity and air conditioning were installed using city funds. The gallery was updated, and a temporary remodeling of the candy nook was completed.

Taking advantage of the energy created by the revitalization of downtown Topeka, a renewed push to restore the Jayhawk to a movie and live entertainment venue has begun. Jayhawk Theatre: From grandeur to closing to rebirth | The Topeka Capital-Journal